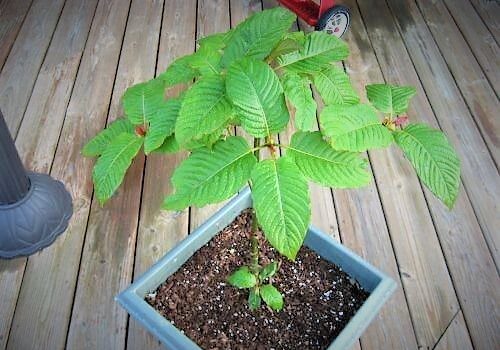 Mitragyna speciosa or Kratom is a tropical tree with large oval leaves that grows throughout Thailand, Malaysia and Indonesia. Since ancient times, it has traditionally been used as a strong relaxant, effective painkiller and substitute opium. Kratom has psychoactive properties paradoxical in small doses, it has a stimulating effect, and large -shows a powerful sedative effect.

Mitragyna speciosa reaches 50 feet in height; branches spread over 15 feet. The trunk is straight and branching. Leaves – dark green, glossy, smooth; simple, large (3-20 cm by 12.2 cm), arranged crosswise and have stipules. Stipules are lanceolate and pronounced. Leaf blade leathery, elliptic, obovate, slightly hairy below, with unexpressed tertiary veins with a sharp tip and a round base with several prominent secondary veins. A narrow stalk. Kratom is sensitive to lack of moisture, and if grown out of natural habitat conditions, to the cold. You can know more about kratom here http://kratomcabin.com/

Traditional use in Thailand goes back in time, and its beginning can not be determined. The first reference to Kratom in Western literature belonged to Lowe, who in 1836 wrote that Malaysians have used Kratom the plant as a substitute for opium when the latter was unavailable or too expensive.

In the 19th century Dutch botanist Pieter Willem Korthals began an extensive research project in the East Indies. Flowers Kratom shape reminded him of the bishop’s headdress – miter, and as the local population with respect to this plant, he called this kind – mitragyna speciosa – “precious miter.”

In 1901, scientist L. Wray has revealed the use of Kratom methods such as chewing tobacco and brewing tea. In the hope that the active substance is isolated from Kratom and applied in medicine, L. Wray sent copies of leaves and Mitragyna speciosa, Mitragyna parvifolia in the Research University of Edinburgh. And in a short time, scientists have identified the main psychoactive component of Kratom – mitragynine and mitraverzin.

Residents of Thailand and Malaysia are two major types of Kratom, Kratom leaf with red veins identified by the color of the veins in a leaf. Traditionally, the leaves with green veins are superior in strength to the leaves with red veins. They report that the color of the veins of the sheet is entirely dependent on the stage of the life cycle of plants, and may subsequently change. In preparing the leaves for consumption midrib sheet is usually removed, as it is believed that it causes nausea.